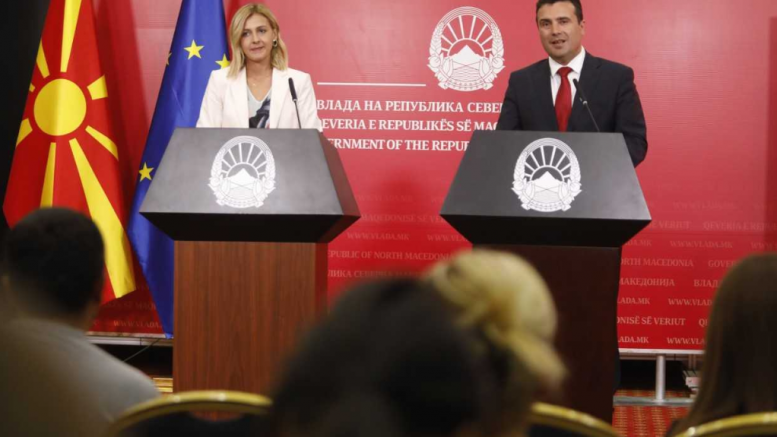 Choosing Nina Angelovska: A chance for youth or a Cabinet bandstand correction

Nina Angelovska had her first press conference as Minister of Finance. She appeared alongside the man who himself wanted to be finance minister. For a short time, Zaev had a dual role, when besides being the head of government, he also covered the finance sector. But when he could no longer be prime minister and minister, he gave a chance to Nina Angelovska. Angelovska says that she is the right person for the position because the ministry lacked a good manager.

Prime Minister Zoran Zaev’s long-awaited staff broom has not brought any drastic news. Controversial personnel like Sadula Duraki for example, not only went unpunished, but also got bigger positions, in his case – the deputy prime minister’s chair. With every change of directors or ministers presented, the administration of the SDSM and DUI coalition has been more criticized than praised.

On the other hand, government officials whose mandate was not disputed in public were removed from their posts. Dragan Tevdovski, the former finance minister is one of these people. While he was the head of Finance, there were various reactions to his work as well. It was speculated that he is not a favorite among big business or that he does not understand SDSM’s vision for the economy, and that he is more of a theorist than a skilled macro-economist. In any case, Tevdovski was generally regarded as a decent and honorable official.

Senior party sources from the party leadership, speaking with two IRL journalists, argued that Zoran Zaev has his own vision of macroeconomic processes.

“They have common respect with Tevdovski and have worked great together, but I think that in some areas they did not have and understanding on the common vision. The President has some ideas that he wants to implement, of course with all the professional help from the people in the Ministry,” says a senior official in SDSM.

The exact reasons for his dismissal remain unknown, but a few months before Zoran Zaev announced Nina Angelovska known as “Nina Grouper ” (as the company she founded), the public was in a mild shock as Zaev announced himself as finance minister and prime minister at the same time. State Committee On Prevention Of Corruption slammed that there is a conflict of interest. The search for a new minister has begun. The names that surfaced included the acting governor Anita Bezhovska Angelovska and Tatiana Sterjova. Nina Angelovska won.

Nina Angelovska was elected as new finance minister in the Assembly on Saturday with 64 votes in favor and 18 against. She is a young and undoubtedly successful entrepreneur. One of the founders of the company Grouper – the first Macedonian online coupon service. But her rich summary lacks significant monetary policy experiences and engagements, as well as work in financial institutions. Prime Minister Zoran Zaev sells Angelovska’s election as a chance for young people, as a final inclusion of those not involved in the decision-making process.

“Nina Angelovska, who I recommend, is 31 years old. I want to send a message to the young people, to find their place everywhere, in all jobs and even in such high positions that our country can offer. She started her doctoral studies in 2013 and in 2016 she holds a PhD in organizational sciences and management at UKIM. She put her acquired knowledge into practice and launched the first group discount website “Grouper.mk”. She experienced huge success, became a market leader and gained a lot of accolades, ” Zaev said about Angelovska.

Opponents mostly debate her youth. There were also chauvinistic attacks. Supporters, meanwhile, advocated that young people should be given a chance. Few have talked about a merit and competence system whereby one gets the chance to run one of the most powerful departments in government and manage the citizens’ money.

Image PR director, Angela Peeva Laurencic tells the IRL she does not understand why so much dust is rising for Nina Angelovska.

“She’s not that young. It is about a successful woman coming from the real sector who is young and ambitious. She left her business behind to work for the state. Why is she being tried before delivering results? The message Government sends with her engagement as a minister is beautiful. Angelovska has decided to bite and fight, and we need such successful and ambitious people,” says Laurencic.

Much has been said about her age, but so far no one has addressed questions about her experience and qualifications in one of the most serious sectors in the country.

Slagjana Taseva, president of Transparency International, cites the lack of a system of competence as the main problem.

“I don’t know her, I haven’t met the new finance minister. Whether she will withstand political interference is a matter of integrity. If she doesn’t like how decisions are made, she can and will go. Everything is politics in the country and this is an improvisation. In terms of being young, we’ve had prime ministers being 29 years old, and that is the most important post. The problem is we didn’t build a system of competence,” Taseva told the IRL.

Nina Angelovska runs a successful small company with 12 employees, with revenues up to 370,000 euros last year and profit of 120,000 euros. Now she has the budget of the Republic of Northern Macedonia in her hands.

The IRL reporter at today’s press conference in the Government asked Angelovska about her experience in macroeconomics, considering that managing a small company budget and managing the state budget is very different.

Angelovska replied that she’s aware that she’s different profile from previous people who held this responsible position so far. She did not address the public dilemmas surrounding her expertise in working with financial institutions. She said that is why she will have a team and she would manage.

“I know that macroeconomics is an extremely complex area and no one has ever run an institution alone. We are talking about managing an institution that requires quick decisions based on good information and good analysis, and in managing I think that I have proved both theoretical and practical,” Angelovska added.