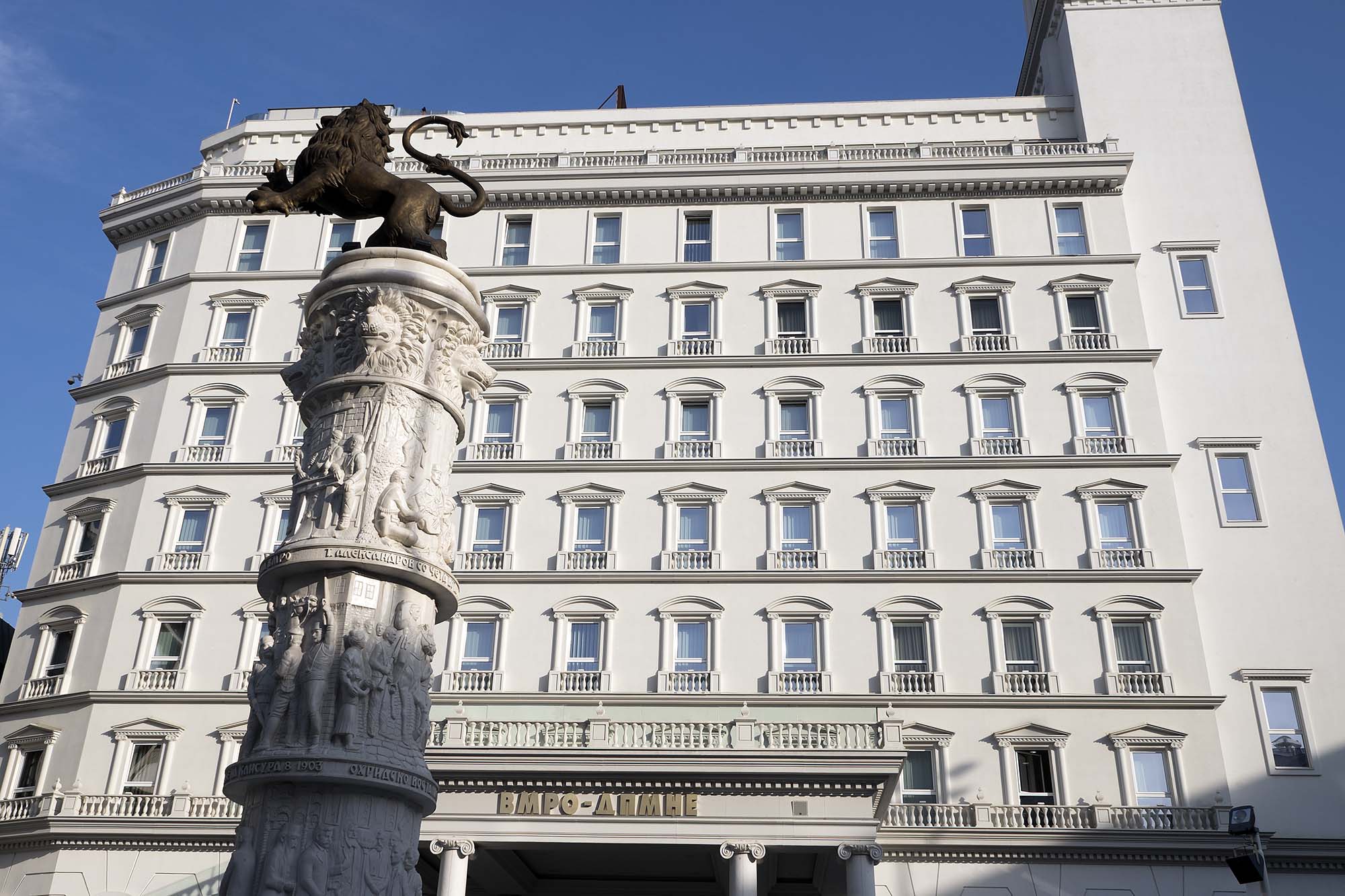 A wide-ranging corruption investigation by the Macedonian special prosecutor has unearthed new evidence of wrongdoing in dozens of deals by VMRO-DPMNE, the right-wing party that ruled the country between 2006 and 2017.

The prosecutor alleged that the party illegally collected at least 4.6 million euros in a money laundering and extortion scheme, accepted illegal donations to construct its lavish “White Palace” headquarters in Skopje, and illegally purchased at least 68 other properties across the country worth 17.5 million euros in total.

The allegations are part of two indictments charging party officials — including former Prime Minister Nikola Gruevski, who fled to Hungary in November — with money laundering and abuse of their official positions. Gruevski has been convicted and other party officials charged in related cases as part of a broader government corruption probe.

An analysis by reporters from the Investigative Reporting Lab Macedonia, OCCRP’s Macedonian member center, used public records and documents from prosecutors to pinpoint the 69 party-owned properties at issue, some of which have no obvious links to VMRO-DPMNE functions. This report marks the first time the detailed property list has been published. At the time of the purchases, which included fields, pastures, apartment buildings, and private houses, such party ownership was forbidden under Macedonian law. Prosecutors have not disclosed who, if anyone, used the real estate.

The Skopje Criminal Court, acting on a request from the office of the special prosecutor, froze the 69 properties on Oct. 31, 2018, including the White Palace headquarters.

The action came after party leader Hristijan Mickoski told reporters that VMRO-DPMNE was short of funds and might have to sell or rent its headquarters. The freeze means that the party cannot sell or mortgage the White Palace or other properties.

The questionable land deals and allegations that party officials ran an extortion and money laundering scheme came to light as part of a broad investigation that Special Prosecutor Katica Janeva and her colleagues have been pursuing for more than a year and a half. This part of the widening probe into corruption is known as Talir, named after a centuries-old silver coin. 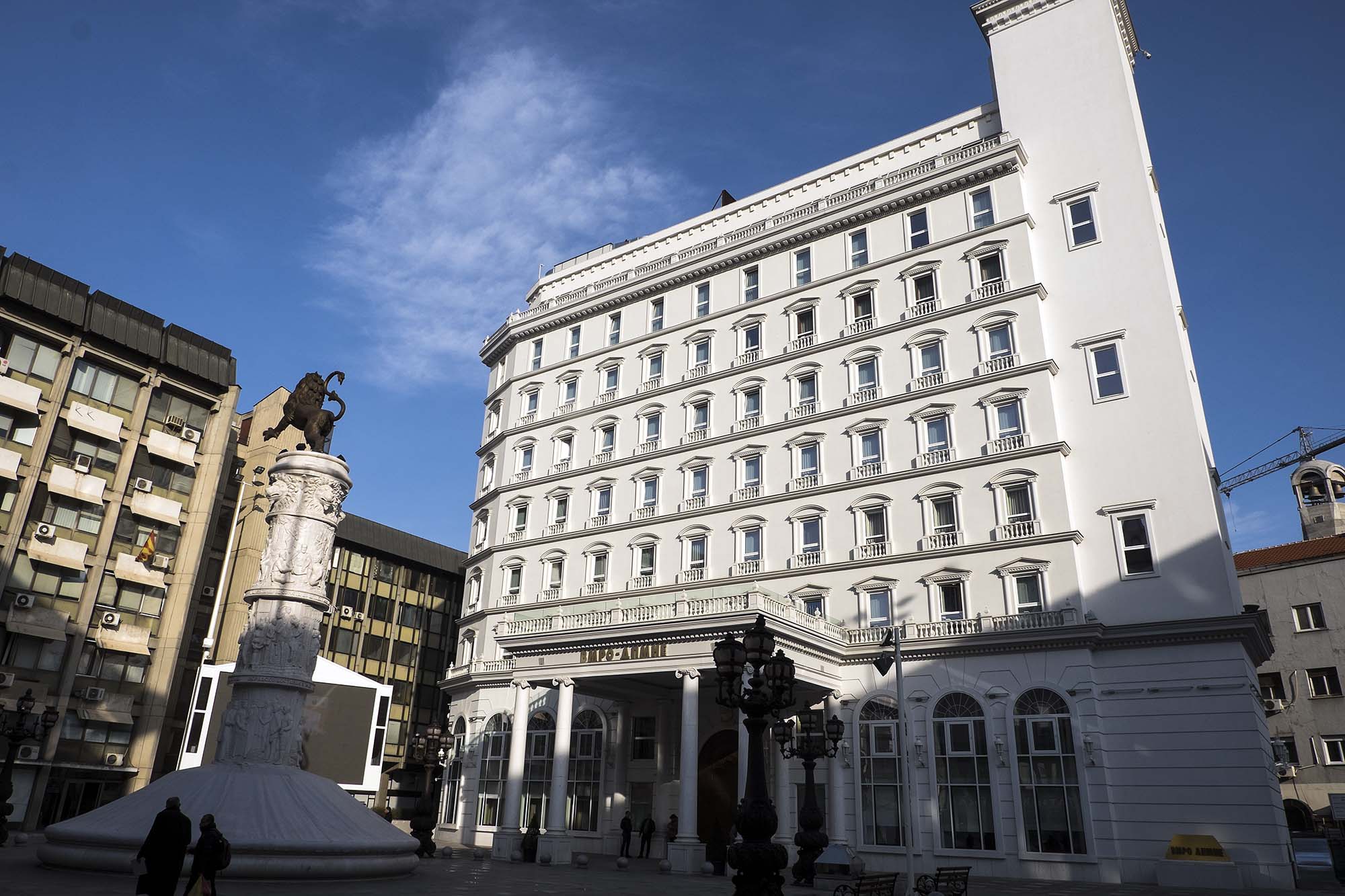 Janeva was appointed special prosecutor by Macedonian lawmakers in 2015 after pressure from the European Union. After president Gjorge Ivanov halted probes into more than 50 public figures embroiled in a wiretapping scandal (including Nikola Gruevski), protesters took to streets in Skopje and other cities in the summer of 2016 in support of the special prosecutor, who had been working on the case.

Information from the wiretapped conversations has helped prosecutors bring indictments for a wide range of questionable deals in areas including real estate and government contracting.

In a prelude to the most recent indictments, deputy special prosecutor Lence Ristoska said at a news conference in 2017 that evidence pointed to “real estate purchased on behalf of the political party, but not used for party purposes,” a violation of Macedonian law. She added: “We noted that there are no party features at all on those properties. In some cases we have properties that are not marked [with a party insignia] and we have situations where there are pastures or fields, which are obviously not used for the purposes of the political party.”

The indictments allege a complex web of donations and deals that violate Macedonian law. Prosecutors believe Gruevski and Kiril Bozinovski, the party secretary-general, gained a disproportionate benefit for VMRO-DPMNE in the deal to construct the White Palace party headquarters, they said in a news release. The party paid only 815,323 euros for a building that is now valued at 14 million euros, meaning it could reap a huge profit if sold.

In July, the new Social Democratic Union of Macedonia (SDSM) government and Parliament eased restrictions on property ownership by political parties, allowing them to own land and other real estate and rent out their properties. But the new law does not affect the pending criminal cases because it isn’t retroactive.

VMRO-DPMNE didn’t respond to questions emailed by the Investigative Reporting Lab Macedonia about the new charges and the party properties under investigation.

To show the scope of the VMRO-DPMNE’s real estate holdings, Investigative Reporting Lab Macedonia has created an interactive map based on information supplied by the special prosecutor’s office.

The map shows the party’s 69 frozen properties across the country.

The other properties include houses, stores, apartments, lots with buildable land, lots with buildings under construction, gardens, and fields. All the properties on the map were purchased between 2009 and 2015, the period covered by the investigation, and were listed in documents from the special prosecutor’s office.

Unless the properties are linked directly to party functions, such ownership would have been illegal at the time the real estate was acquired.

The freeze on party properties came just a few weeks before the prosecutor’s office filed the two new indictments against Gruevski, the former VMRO-DPMNE prime minister of Macedonia who fled to Hungary last year, and other party officials.

The indictments, issued on Nov. 22, 2018, have already led to one guilty plea from a party official; two others are awaiting trial.

The officials, including Gruevski, “pressured representatives of the legal entities that had concluded public procurement contracts with state bodies, public enterprises or units of local self-government to provide cash for the political party VMRO-DPMNE,” the prosecutor’s office said in the indictment. Party officials then used illegally obtained funds to buy the questionable real estate.

In the indictments, prosecutors alleged that Gruevski, who was prime minister from 2006 to 2016, used illegally obtained funds to finance VMRO-DPMNE and its activities, including acquiring various properties across Macedonia and building the party headquarters in Skopje.

The first indictment accused Gruevski, former party secretary Bozinovski, former Minister of Transport and Communications Mile Janakieski, and parliamentarians Ilija Dimovski, Leko Ristoski, and Elizabeta Cingarovska, as well as the VMRO-DPMNE party, of illegally receiving 4.6 million euros. The prosecutors said the illegally acquired funds were entered in party records as fictitious payments and then funneled into real estate deals between 2013 and 2015.

Cingarovska recently entered a guilty plea and was sentenced to two years’ probation.

Prosecutors said they believe Gruevski knew the party was violating the rules as far back as 2009, but authorized the funding scheme to strengthen both the party and his control over it.

Beton’s connections and contributions to the party were illegal. Macedonian law bars companies from contracting with or making donations to political parties if they participated in a major public works project, as Beton had.

The company, owned by Mincho Jordanov, one of Macedonia’s wealthiest businessmen, had government contracts to build elements of the Skopje 2014 project, a massive makeover of Skopje that was derided by critics as a waste of public funds. The company was paid more than 200 million euros for its work on that project.

Prosecutors said that over 75 percent of Beton’s revenue in 2011 and 2012 came from state and local governments and from public enterprises run by VMRO-DPMNE officials, further amplifying their allegations that the links between the company and the party were illegal.

Gruevski said on his Facebook page on Nov. 20 that he had been granted asylum in Hungary. The Hungarian interior ministry reported that he had met the conditions for asylum.

Macedonian officials are calling for his return. Gruevski was supposed to begin a two-year prison sentence following his conviction in May for putting pressure on then-Interior Minister Gordana Jankuloska to get her office to buy a 580,000-euro Mercedes for his personal use. 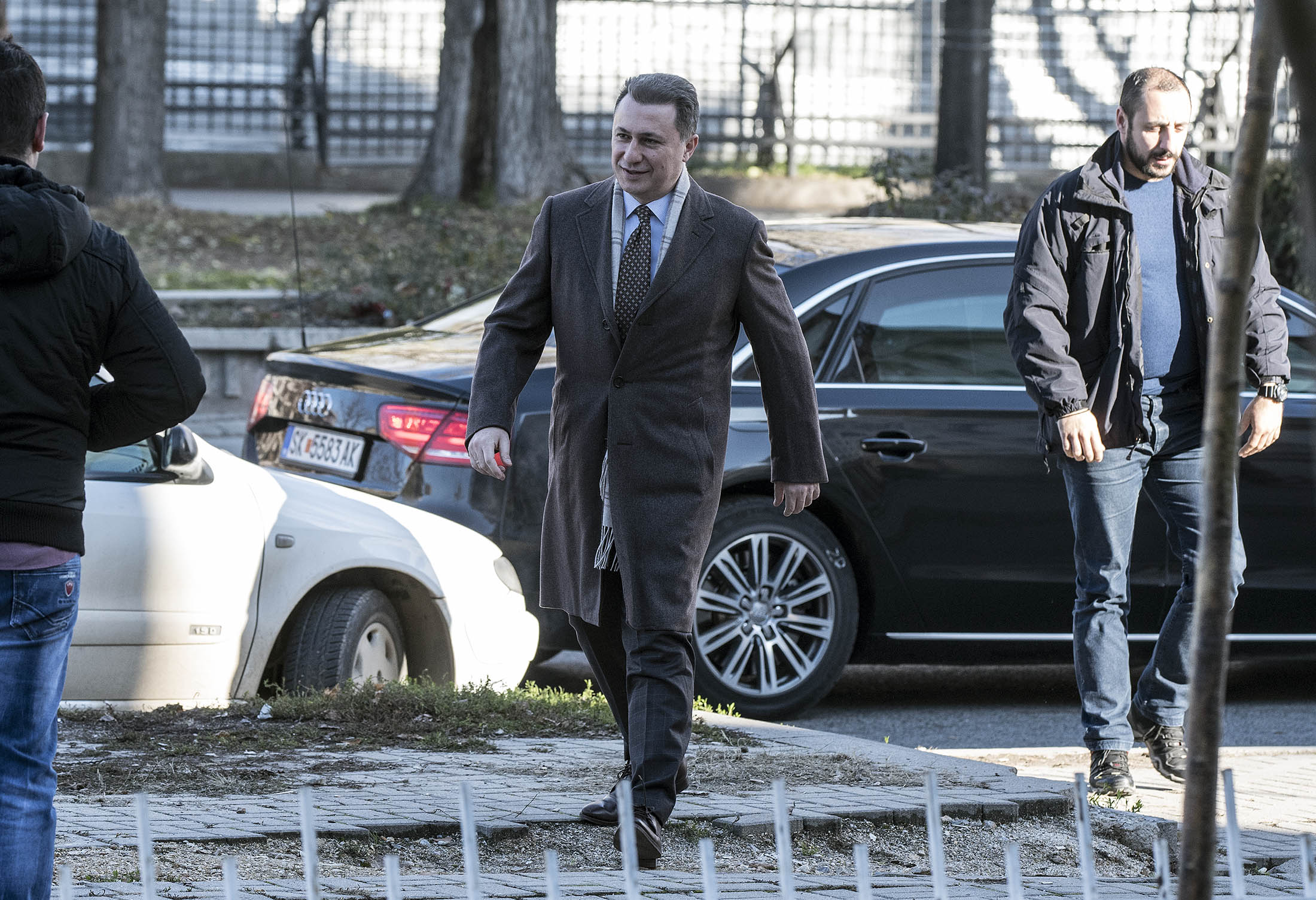 Gruevski also faces charges in four other corruption cases, and is under investigation in two more, the prosecutors have said.

After the Oct. 31 freeze was imposed by the court, VMRO-DPMNE officials questioned the motives of the special prosecutor, complaining that the effort was an attempt to damage an opposition political party.

Dimche Arsovski, the party’s spokesman, described the prosecution as politically motivated and unprecedented in Europe.

So far, prosecutors have questioned more than 500 witnesses and collected 11,000–12,000 records of donations to the party treasury. Prosecutors have also examined thousands of documents from municipalities, the official real estate list maintained by the government, and private firms and banks.

David Ilieski contributed to this story.